Demystifying Deeper POV: Behind the Scenes

First, I want to thank you so much for joining me the past four weeks for Demystifying Deeper POV.  I have placed the link to the start of the series on the sidebar if you want a little refresher or to recommend it to friends and writing groups.  It will remain there until I get the ebook finished--which will include even more explanations and examples, tips and tricks, and a bonus or two...including the full version of the Dane and Kathleen short story, Marry Me, Cowboy.

Speaking of which, the story itself was just one of the fun parts I had with this series. Example-wise, I really wanted a consistent reference to use, rather than just random examples here and there--I wanted an actual story, feeling it would be better for more relatable, cohesive, and interesting examples.  Marry Me, Cowboy was a free read I wrote a few years ago and which received a lot of good comments with respect to the point of view. I recently received my rights back for this manuscript (very fortuitous timing) and it was exactly what I was looking for...except for one thing--there was a lot of "after" examples, "Swatted Version" as I like to say, to use, but what about the Telling/Fly examples?

Have you ever written a story backwards?  I think I both laughed and groaned the whole time going sentence by sentence and/or paragraph by paragraph and revising using every point of view issue I've come across in over ten years of being an editor.   Let me tell you, it takes just as much effort writing backwards to a rough copy as it does revising and fine-tuning for a good copy.  The bonus is that not only does it work for this series, but I now also have a base go-to manuscript for other examples of mechanical issues I have been planning to do tips and tricks posts about for upcoming Writing Wednesday blogs. 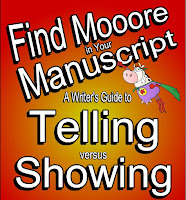 The series itself was a long time percolating in the back of my mind.  Originally, I had it as Finding Mooore in Your Manuscript--as in Mooore, because I love cows.  This is a mock-up cover I had created for inspiration.

To me, cows are such a relaxed and a happy animal LOL.  I've been collecting them for years--my kitchen has one on almost every surface and my office is pretty close to the same.  Let's just say friends and family have kept me with a full herd😄. One of my favorite is this cow tape dispenser my mom gave to me for Christmas ions ago. 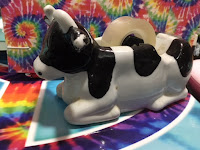 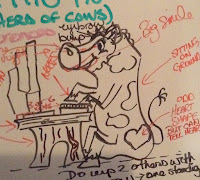 But, even as I doodled cows and tried to bring them in to represent a series of sorts, something just didn't feel quite right enough to put it all into play.

Over the years, the more I explained the concept of Telling versus Showing and Deeper POV to authors, the more the Fly POV became my go-to reference for examples and understanding.  Then one of my authors sent an email thanking me for "swatting" those pesky flies out of her manuscript, and I just laughed at how hilarious yet appropriate the term was. So I began to doodle flies. 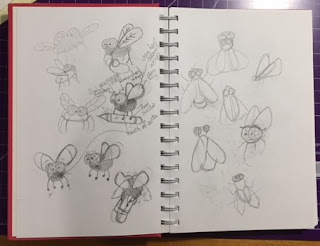 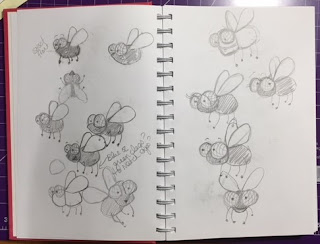 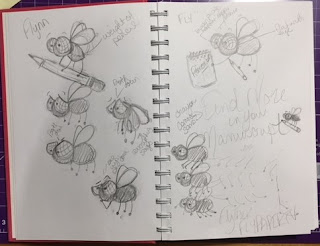 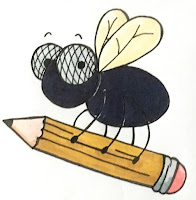 You can see the progression from my first ideas to the Fly you recognize from the series.  I still plan to fine-tune him a bit more for the next version and will post some progress as I do. 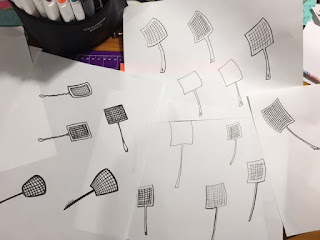 But, just like writing, drawing takes practice, and you just keep working at it, studying, and practicing until you come up with something you are happy presenting to others.

As for the title of the series, that was the last to come around--which is funny, because when I write fiction, I always need to have a title before I can really get going on the first draft and usually have it by the end of the second chapter at the latest.  However, I was determined that this was the year I would get the series out there, and decided on October 31st both for time to get it finished, but also because there has always been this confused, fearful reaction where Telling versus Showing and especially Deeper Point of View were concerned, so Halloween seemed perfect.  And as all the mystical, magical and mystifying elements of the season got underway, the title finally hit me with that wonderful, elated and contented feeling of everything coming together just as it should be.

Demystifying Deeper POV is my passion project because I am able to incorporate all my creative joys--Writing, Editing, and Art-- to help writers grow and reach their dreams of publication.

I really hope this series has helped and inspired your writing, and will do so for many others as I continue to revise and fine-tune it.

So, don't forget to keep your fly swatters close by on your desk...and most of all, keep writing and following your dreams, because I for one can tell you, dreams don't always come quickly, but they do come true if you just keep working hard and believing!

Posted by bystacydawn at Wednesday, November 28, 2018 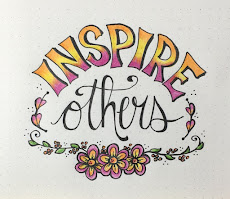 Do you cringe when told there is too much Telling versus Showing…or worse, a lack of Deeper POV in your manuscript? Do you even know what that actually means?

Don’t worry, because you are not alone—not by a long shot. Many writers struggle with these terms, and that is why I created this four part series: DEMYSTIFYING DEEPER POV. 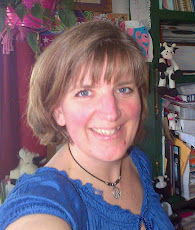 As a freelance editor, author of over twenty published works, and reinvented artist, I believe all dreams are possible but not easy, and life holds no end of inspiration for finding happiness and humour in the simplest things.